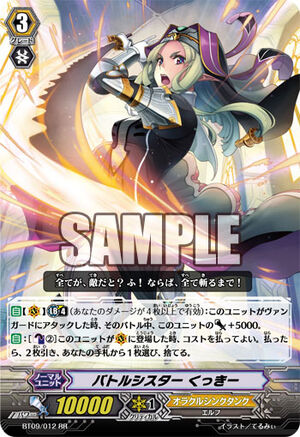 Hello everyone, Oracle Think Tank and a few other clans will be receiving their generic Limit Breaker in set 9 of the Cardfight!! Vanguard boosters. The main topic today is Battle Sisters, Cookie.

Like all other generic Limit Breaks, a vanguard Cookie gains +5k if you have 4 or more damage when attacking a vanguard. Although the ability is a little plain, but it is powerful and applies quite a huge pressure on any kind of opposing vanguard. Cookie also has her own personal booster, Cream which can bring her attack power up to 21 or 26k. That is one of the reason generic Limit Breaks are sought for because they can make a good rear column.

In my opinion, Cookie is the best thing to ever happen to Oracles since LuLu. Cookie is a very flexible unit which can be added into any other Oracle builds. She gives quite the better alternative for Tsuku builds instead of CEO and also could increase the offensive and draw capability of CoCo builds. She is also decent in a Fromage build, being a possible 21k rear column with Battle Sister in her name. She could also be played with CEO with the consistant ability to hit 21k on rear.

Cookie is also very powerful on her own build. She has more access to Oracles cards compared to Fromage. You have the freedom to use Tom and also can have Macaron as 12k attackers. Her draw ability is also very good as it can help get you that null you might need and also help you setup a field if you need one, ditching out your draw triggers or grade 3.

Cookie is an amazing card and great addition to the Oracles. This card alone has greatly increased Oracle's offensive capabilities and also added more options to deck variations.