Exculpate The Blaster! My Thoughts 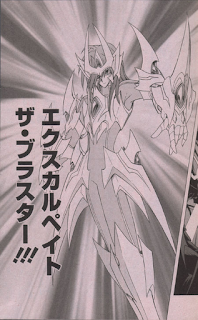 Hours ago, a live stream of a conference was held by Bushiroad. One of the main focus of this conference is the revelation of the promo card that is to be released along with the upcoming manga volume of Cardfight!! Vanguard.

Continuous [V]: If you do not have a card named "Blaster Blade" in your soul, this unit cannot attack.

Auto: When this unit is placed on the rear-guard circle, retire this unit.

Activate [V]: [Counter Blast(3)] Until end of turn, this unit battles with every unit on your opponent's field in one attack.

Auto [V]: When this unit attacks, place all the cards in your soul except cards named "Blaster Blade" to the drop zone. For each card placed onto the drop zone, this unit gets Power +2000 until end of turn.

To play this unit, you would most possibly need more grade 3 to have a higher guarantee rides and re-ride. You could have at most, up to 3 of this card in your deck however, I would recommend not going higher than 2, since Wingal Brave can help bring out Exculpate. Having more grade 3 would also mean that you should have cards which can help you exchange your hand like Lien and Miru Biru. Those would help you get rid of unnecessary grade 3 for better cards that can be used for guarding. Miru Biru would be very useful since you can swap out a card for each hit Exculpate does.

For the grade 3s, Gancelot is a great card to be used with this card, not only that it can secure you a Blaster Blade ride, you could also apply an early critical pressure with the extra 2 damage counterblast. With the increase in grade 3s, Brigitte is also a good cheap option for the deck. Pendragon is also a decent choice. Pendragon could decrease the amount of grade 3 left in your deck and also have a chance at bringing out Exculpate. Pendragon's power increase when ride also works great since your opponent should be pretty worn out after Exculpate's attack. Lohengrin is also an option, it stacks up soul for Exculpate to use and could possibly soul charge a Blaster Blade for you. Majesty is not bad but, without decent toolkit, Majesty won't apply much pressure, and I doubt anyone would really want to ride Exculpate over a Majesty with 12k defense and 2 crit attacks.

Trigger wise, I would use Criticals as Exculpate battles with every unit on the field, Exculpate should launch the first attack. Draw Triggers could also help with getting Exculpate faster and grade 3 for re-rides. Gordon could help fill the extra shields needed due to having more grade 3 and draw triggers. You could skip using Heal Triggers for more offensive power but I won't recommend it.

Though the damage usable is scarce but it's there, you should plan what you want to use them for. It could be used by Blade to retire more units. Akane could help call out units for a little hand and field advantage. Garmore is another unit to help fill your field in exchange for a card in your hand.

I think this is a very interesting card, and is very excited to be able to test it. This card is also the best card to use against Platinum, it would deplete your opponent's field before they can use the limit break.