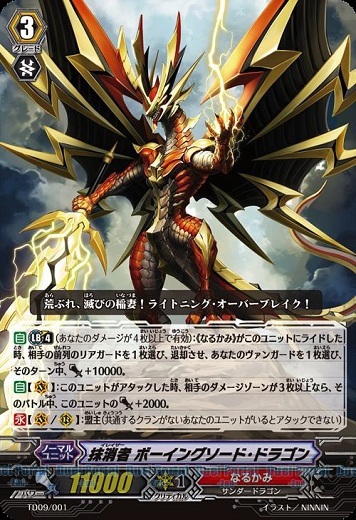 Hello again! Very recently, Bushiroad had a live conference and revealed this unit with a Limit Break ability which activates when another Narukami rides on it! This card was first shown as the box art of the upcoming Narukami trial deck. It is confirmed to be named, Eradicator, Vowing Sword Dragon.

For now, I think the Break Ride ability could be treated as any other ride ability and gaining advantage due to riding. This card would most likely be used in a deck that focuses on riding the same unit each turn and would in this case also be like a form of Persona Blast but the restrictions are not as strict. A few cards which also revolves around this strategy would be Pendragon, CoCo, and almost all the generic Limit Break units.

However, the Break Ride seems to have a low cost due to the need to ride which would be quite fair due to the need to use another card on your hand. The need to have at least 4 damage before you can use the ability also justifies for the cost. These free cost can be used for other units for power gain, or any other clan gimmicks which needs the damage.

From observing this new unit, one weakness the mechanic has is the need to ride another unit and the possibility to get no plus from the ride. Instead this will bring down your hand and there might be times when you would have to decide if you want to ride or call the unit. Unless if you have a certain difference in hand advantage, using the ability might hurt you more than giving you the advantage.

I can see a lot of potential in this mechanic. Adding some cost on it could make it to have some very powerful abilities. After having seen this card and the PV for the next season, I am looking forward to what Bushiroad has in store for us.