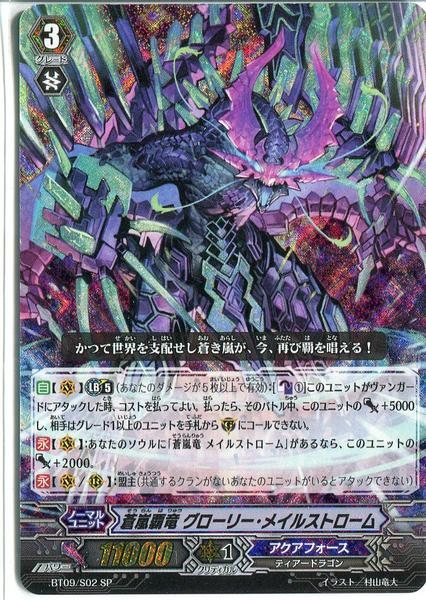 Apparently someone got the card early -gasp-. Also, like the other two main x-rides, Glory Maelstrom also has a Limit Break 5!

AUTO [V] Limit Break 5: [Counter Blast(1)] When this unit attacks a vanguard, you may pay the cost. If you do, this unit gets Power+5000, and your opponent cannot call grade 1 or higher units to their (GC) from their hand.

A very impressive ability for a low cost, but a high restriction. This means you would have to strategize on making a deck that would focus on taking damage and rely on playing defensive instead of the usual Aqua Force attack rush. This would limit the usage of stand triggers but this ability is amazing with critical rush. This would be especially true if you get that lucky critical off your first two turns.

In my opinion, this ability is the best Limit Break 5 because it has a low cost which makes it a constant threat. Your opponent won't be able to use cards which are grade 1 or higher from their hand means that they don't have access to perfect guards, and the +5k make a whole lot of difference in these cases. Having unit to take care of their rear-guards also works to bring down their usable units to guard this monster.

Although to fully utilize this unit's ability you would need to restraint yourself from calling too many rear-guards to the front row. So the opponent would be forced to attack your vanguard instead to give you damage or, they can drag it out a bit by not attacking which would still give you some form of advantage. This unit highly relies on late game pressure and the 'attacks per turn' mechanic for most Aqua Force units would be a little more difficult to utilize.

That being said, having the previous Mael as the other grade 3 of the deck isn't too bad. It is a good 11k rear-guard and has the potential to hit 20k with Torpedorush Dragon. With Glory in the deck, you would have less Diamantes and Benedict, possibly none at all to help Mael's Limit Break but you would have Damon which could help out a bit. Even without those, Mael would still be a good 11k vanguard.

It would be intersting to see how people would play this card and how to play against it. The best solution I've come up with is special intercepts but still, this thing is a pretty big threat and a very strong card.