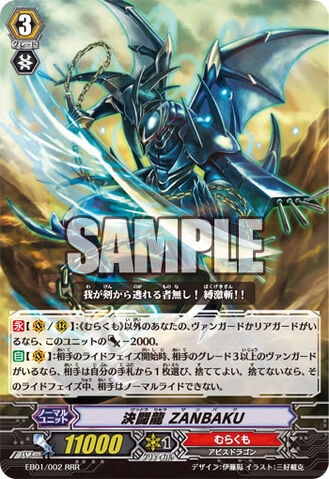 With all the new Ride Breaks being so powerful, many have considered Zanbaku as a way to fight against them. This is actually a pretty good card to use, even in the current situation. It is a counter to many decks that rely on riding another grade 3 like CoCo, Gold Garmore, Soul Saver, the multiple of x-rides and sorts.

The thought of losing one hand could make your opponent second guess their decision to ride another vanguard. Playing Zanbaku with Magatsu chain also gives you a chance at early strikes or harrasments against your opponent which would further decrease their hand/field advantage. Zanbaku is also a decent Vanguard, being a 11k base.

Although, there are also flaws with using this card. Other than the restrictive ability, this card really don't do too much. It's only a stand still Vanguard. It doesn't have the offensive abilities of Magatsu, nor the defensive power of Mandala and Shirayuki. Tamamo also trumps with his consistent front row filling.

Another point is the clan Zanbaku is in. Murakumo does not have much decent support. Their gimmick is to call copies of  units from their deck and then returning them. The ability is decent but to do it continuously means that you will need a good hand and field to do it, along with a supply of open damage. This could help you avoid units that attack multiple units but it doesn't raise your overall defenses. The lacking of special intercept also doesn't help.

The next point would be when the opponent can get more advantage than what they paid for. This is especially true for the current Ride Breaks because of the massive power increase they get. Your resources will be cut down pretty severely too. Most units that rely on multiple rides also have other purposes. CoCo draws 2 cards in exchange of discarding probably another grade 3, Garmore has consistent calls, it would be like exchanging cards, and they will gain it back by calling Dindrane. Some other unit has the ability to retire which would also hurt your field lines.

For now, I think that it's a good idea. The only problem would be that the clan is a little lacking in support. I am really looking forward to how the future Murakumo support would help this card and the clan.