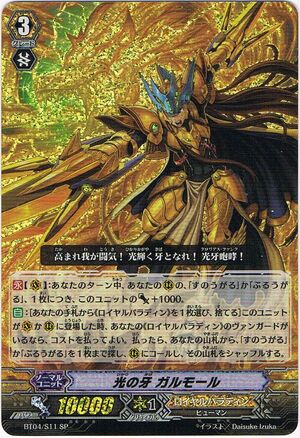 The last part for set 4 would be on Royal Paladins. Finally, after Barcgal getting banned they will get a new starting Vanguard which can be moved when a Royal Paladin rides over it. I am referring to Bleugal. This set also comes with a card, with gold all over it, Fang of Light, Garmore.

This Garmore build is pretty decent with the ability to call units from your deck, thins the deck and also, increases the consistency in field making.The consistency can be further increased with Akane which uses damage to call for units instead of the need to discard your hand. It's easy to get 3 Snogal onto the field, this can bring the vanguard grade 3 garmore to attack at 21k power. If you have grade 3 Palamedes at both sides, every one of your attacks will be on 21k.

The Royal Garmore build is pretty simple and straightforward. The main strategy is to get 3 Snogal onto the field as boosting units. Each Snogal increases Garmore's power by 1000 during your turn. If you have the soul for it, you can also ride Soul Saver to get more power. With the build's consistency to bring out a decent field, you don't have to worry too much about draw triggers and go full offensive with triggers, however, it is good to have some to use it for Garmore's skill.

Overall, the royal garmore build is pretty linear in gameplay. It depends on overwhelming the opponent with hitting high attack power on every column. However, it can also be easily overwhelmed, being only a 10k vanguard.
Posted by Ken at 4:38 PM