Booster Set 9: A Look at the Cross-Rides 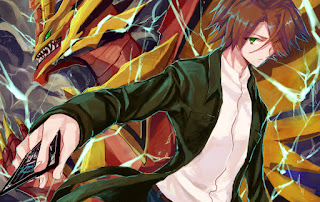 From the recently revealed cards, booster set 9 seems to be filled with cross-ride units, with 2 units officially confirmed as X-rides and 4 more to be expected as X-rides. This could mean to be one of the biggest turning point for the Cardfight!! Vanguard game.

X-rides are units which gains some advantage by power increase if you have a specified unit in your soul. You would have a 13k base power vanguard which provides defense against 21k columns. Besides that, X-rides are also able to form their own 20/21k columns.

When the X-rides was first released along with Majesty Lord Blaster, they were thought to be very powerful, and powerful they were. Everyone was new to them, and the extra base power overwhelmed quite  a lot of strategies and decks without vanilla boosters. Since then, X-rides became much despised by many and also deemed that there should not be anymore X-rides.

For a short time, no X-rides was released anymore, and Limit Breakers became the hit, but then, came Daiyusha X-ride, with Limit Break! However, Daiyusha did not make much of an impact compared to the former X-rides due to it's requirement and the fact that quite a lot of builds have received enough support to fight against X-rides. People had also modified their deck so to prepare themselves for any X-ride opponents.

After that, came images of suggested X-rides, DA Cosmolord and an image of a Ezel-like unit, and now, DA Cosmo was revealed to be not a X-ride, but Ezel got the X-ride. This revelations brought both joy and also dissatisfaction to the players. Although it has a little restiction to it, Platinum Ezel has a very powerful ability to power up all your rear-guards by 5000 power.

Honestly, I think the addition of more X-rides are unavoidable. Personally, I don't really like X-rides but it's something that will happen sooner or later. Bushi might as well place them in our face and say "Take it or leave it". The abilities for X-rides are powerful but not broken. They are something we need to learn to deal with to be able to play on a higher level.

If the expected X-rides are true, a lot more people would want a X-ride for their favorite units. This however, might not come true for everyone. As a player who loves CoCo as my favorite unit, I don't think CoCo would ever get a X-ride because of the way it is played, soulless, and I am satisfied with that. These units also gives purpose to some of the less used units. On the bad side however, the X-rides would mean an increase in card prices especially perfect guards.

All in all, I welcome the cross-rides with open arms, and would accept any tough fights against them with my CoCo. I believe they will help me improve on my build and also help me realize strategies that I have never thought of before.