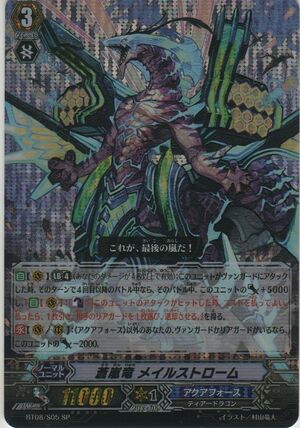 Two post for the day! Today, I will be having a look at the Aqua Force clan. This new clan is a very unique clan that gains abilities based on the amount or order of the attacks.

First of all, this clan utilizes cards that are able to stand itself  in the rear-guard or swap positions with another unit to build up the amount of attacks for the upcoming unit abilities. The abilities varies from increase in power to retiring enemy units and even, letting you draw a card. These skills are very powerful and gives you a great advantage.

Secondly, the power and abilities are stronger as the amount of attacks increases, this means that your opponent would have to let some of your early attacks to pass to prepare for the final attack, or use a perfect guard. This provides a lot of pressure and is not easy to fight against.

Many people have said that they are weak against 11k or more vanguard, especially the cross rides. This is not quite true. The most they would lose would be 1 attack, the second attack can be aimed against the rear-guards. Aqua Force also has a 9k booster, which can reach 18k just a 9k attacker. Their Vanguards also has abilities that greatly increases their power when attacking.

Although the above is true, personally, I don't really like using them. They rely heavily on setting up a perfect field and also needs to maintain them. Without a decent field, they will not be able to fully utilize their abilities. This means that they are a little weaker against rear-guard killers. Another weakness they have is that their main Vanguard units all have Limit Break abilities which means they are unable to activate their ability unless if they have 4 or more damage. This means that they would need to guard for at least 1 extra trigger against enemy vanguard attacks, or risk being hit by a critical.

Personally, this clan is great and is pretty fun to play with, but it's not the ideal clan for me. I do like the artwork for their cards though, they are pretty cool.
Posted by Ken at 11:38 AM