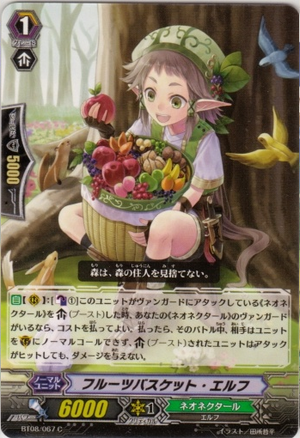 Hello everyone, today I have a very unique card to review. It's a grade 1 common card. It's also currently only available to the Neo-Nectar clan. It has the name, Fruits Basket Elf. First of all, let's look at it's ability.

AUTO【R】: [Counter Blast(1)] When this unit boosts a «Neo-Nectar», and you have a «Neo-Nectar» vanguard, you may pay the cost. If you do, your opponent cannot normal call units to the guardian circle until end of the battle. Even if the boosted unit's attack hits, it deals no damage.

This card is the first kind of skill that causes you to not damage your opponent, instead, it allows you to have an increased chance to hit the opponent's Vanguard to activate on hit effects. Some of the few main abilities that can exploit this ability are: Maiden of Trailing Rose, Avatar of the Plains, Behemoth, Knight of Harvest, Gene, Turtle That Supports the World, Akbara and Maiden of Rainbow Wood.

One good point about this card is that it does not damage your opponent. You might be thinking that this is a weird way to think but, actually, no. With the new Limit Breaks, not damaging your opponent could mean a good thing for you as they won't be dealt the damage required to use their abilities. Besides that, another advantage is that your opponent will not be able to activate any damage trigger while you are able to pull off your card's ability.This can bring quite an advantage especially for critical builds on the fourth damage. You can power up your vanguard and attack with a higher power and a critical could win you the game. Lastly is the advantage in healing, by not dealing damage to your opponent, and if your opponent have less damage than you do, they will not be able to heal with a heal trigger, but you can. This can be used together with Oracles or Angel Feathers that has recyclable heal triggers.

This card is especially good for cheaper builds like Behemoth and Trailing Roses and could save your game by bringing out interceptors with Gene. It's also has a decent power of 6000. I'm also happy that this was added into set 8 since the older cards never got much support. Overall, this is a very unique and special card in my eyes and is very fun to play with.
Posted by Ken at 2:24 PM