Due to the lack of updates in Byond, me being bored led to a look at older cards for builds that can do competitively even in current and possibly future environment of the game. One of these cards is Asura Kaiser from set 1. After the game in my "Interesting Illuminal", it gave me an idea along with Asura Kaiser to make a very stand offensive deck. This deck includes cards from set 9. I decided to post this before the next Kero Kero revelation of cards in set 10 which should be coming on the upcoming weekend. 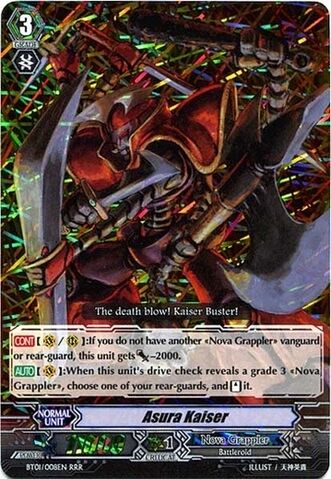 Asura Kaiser is a very strong and stable unit, it allows you to stand any of your rear-guard when you check a grade 3 Nova Grappler during the Twin Drive for Asura Kaiser. During earlier times of the game, this stand ability Nova Grappler has was really menacing and still is. With Beast Dieties in set 9, Asura Kaiser is more menacing than ever.

Beast Deities provides a way to stand your units even without checking for a grade 3 Nova Grappler. A couple of these cards are Beast Deity, White Tiger and Beast Diety, Blank Marsh. Although the cards that can be stood are limited to Beast Diety only, that is not a problem with the amount of Beast Deity available in set 9. Most of those unit gets an increase in power when stood too!

Those units increases the when hit pressure you apply to the opponent which would increase your amount of attacks. Stack that with Asura Kaiser's skill plus 8-10 stand triggers and the deck would be quite something. There's also the Death Army Guy and Lady which further increase your standing powers. Illuminal can also be added into the deck for more stand power during late game using the Limit Break.

The build applies early pressure and a great amount of stand during late game. I would recommend having at least 2 criticals in the build just for the sake of having it. Red Lightning is also an unflipper if you need it for Illuminal. You will be lacking in draw power but the amount of stand you can do will balance out the card difference. If you want some draw power, you can use Street Bouncer. Draw triggers are up to preference too but it is important to keep stands on high.

The build I made is very interesting and fun to play with. There's also somewhat of an excitement on being able to have 5 attacks all boosted, or even more with White Tiger/Blank Marsh. The 11k Vanguards also provides defense against 20k columns.