As many of you might have known, Dragonic Overlord THE END got restricted along with Lizard Soldier, Conroe. For that reason, I decided to make a Kagero deck that does not rely on THE END but is still effective. After looking at a few cards, I decided that Blockade is the best out of them all. 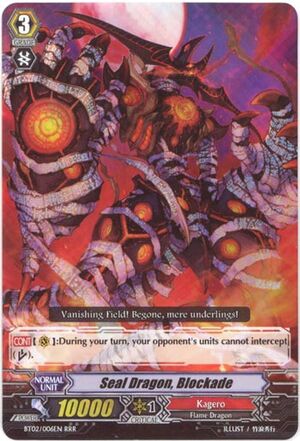 This card stops your opponent from intercepting, rendering their grade 2 on the field useless. Although the skill looks plain and not very useful, especially with Blockade's low power, it is in fact a very powerful skill.

As from a previous statement, the opposing front rows will be locked onto the field. You don't have to do anything to them. This means that you can focus on taking out boosters and forcing out more 10k shields from your opponent's hand.

The strongest part about this deck is the retiring ability. Having 4 of each Kimnara, Berserk Dragon and Gattling Claw Dragon means you can easily break your opponent's field. This will force them to call out more units to the field which would further decrease their defenses.

There are also some other very useful cards to take out boosters. one of them is Wyvern Strike Tejas. This unit is able to attack the back row rear-guard on the same column he's on. Having Heatnail also pressure your opponent to send out more defenses than they really need. If you are worrying about X-rides, Executioner on the rear-guard with Heatnail is a 18k column.

Aside from all those, the very important starter, Conroe is also available on 2. Conroe serves a very important role to bring out more Kimnara or Heatnail from your deck if not, key boosters. It is also a great early boost. Also, you have extra free space for the Bellicosty unflipper which would help in your somewhat high expense of counter blasts. Striken is also an option if you so ever desire the extra critical for one turn.

I've tested this deck and it's amazing. It does well even against limit breaks, break ride and the such. Your opponent would normally have 1-2 boosters or even, none. The price for the deck is cheap too, the only expensive card would be Barri where you only really need 3 with all the retiring you can do.