Continuing on from the last post, this time we have Kagero. Kagero has been a dominating clan since the beginning of vanguard and still is. Right now they have a huge arsenal of cards that can retire opposing rear-guards for very cheap costs and also a good bunch of skills to re-stand their vanguard.

The most threatening card they have right now would be the only usable grade 4 right now, Transcendence Dragon, Dragonic Nouvelle Vague. Nouvelle's most devastating skill is it's Limit Break that retires all of your opponent's rear-guards. This skill easily cripples any advantage your opponent has against you, and having 13k base power means your opponent would have to build 18k lanes to fight this card. Aside from that, with Nouvelle as your vanguard, any of your opponent's trigger that appears during your turn does not work. This means they are unable to rely on triggers for further defense when you attack. It also doesn't help that you are not able to use grade 0 to guard Nouvelle's attacks.

Nouvelle's power becomes even more devastating with a re-standing break ride. To help search those out, you have cards like Nouvelleroman Dragon, Eternal Bringer Griffin and of course, the grade 3 searching starter, Red Pulse Dracokid. With those, you don't have to worry about missing your grade 3s. 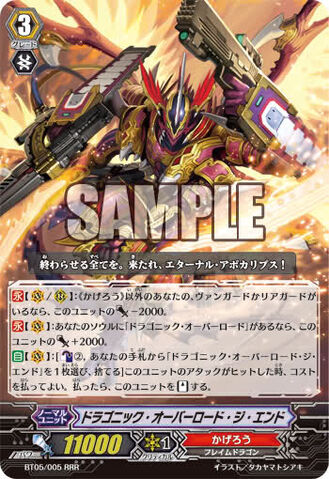 Then we have Dragonic Overlord the End. Despite being a card made two seasons ago, The End is still a very powerful card, more so because of the existence of the Dragonic Overlord break ride. Though the original Dragonic Overlord is also useful in producing massive power lane that can demolish the opponent's rear-guards at the same time.

One of the reasons why The End is such a strong card is because it's ability works even if you hit a rear-guard and it's not even a limit break! With Bahr boosting, The End can easily hit for 19k which would take out more from your opponent's hand if they decide to defend their 9k rear-guards. Since the skill is not a Limit Break skill, you can apply pressure on your opponent the moment you have two damage. Your opponent could either throw out their hand to stop you from re-standing or take a risk and hope you don't have another The End in your hand.

In a clan with lots of options to retire your opponent's field, it will not be easy for the opponent to keep an advantage over The End. I recommend Dragonic Burnout as it does not take any counter blast for it's skill.

Those are some of the most dangerous cards in my opinion. Though, I believe each card has their own strength and weaknesses and there are ways to play against them. It might not be easy but with a good amount of games against these cards, you could work out a way to defeat them! I managed to get a CoCo deck match head to head against these cards, maybe except Glendios.
-----------------CoCo 4 LyfPeace Out
Posted by Ken at 5:50 AM