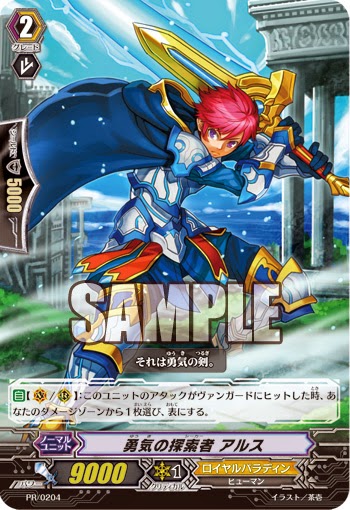 Hello everyone! Today I am going to write another card review! I will be writing on a card that is not released yet as it is a promo card for pre-ordering the Vanguard Movie tickets, I believe. This card is Seeker of Bravery, Ars.

Seeker of Bravery, Ars is a very unique card and would prove to be very useful in many different decks in the future. This is because vanguard cards is currently moving towards less clan restrictions and Ars is just one of the cards to prove so.

Ars has a very generic ability which is already in many different clans. His ability is that you can turn one of your damage face up when his attack hits a vanguard. The only difference he has to the other cards similar to him released so far is that Ars does not require you to have a specific vanguard. Having no vanguard restriction, Ars can fit into any decks that uses a lot of counter blasts, provided that there are no cards with lord in the deck.

One good example of an upcoming card to be released on the next set that would function very well with this unit is Emerald Blaze. Emerald Blaze has a high counter blast cost of 3 for his Legion ability. With Ars, you make it quite much more possible to use Emerald Blaze's ability twice or more per game. Not only that, Ars also opens up more option for your deck as you can spare some extra counter blast for other units. Furthermore, Emerald's Legion ability can call Ars to the field from your deck!

Ars also plays in important role in his own clan. Royal Paladin is a very counter blast heavy clan, mostly to call units from the deck. They can even retire opposing rear-guards with Blaster Blade. Ars is the only unit to allow the clan to unflip the used damage so you can do much more.

All that is good but, Ars is a very rare card and would be difficult to obtain. My only wish is that he would be easy to find in the English games. Getting a few playsets of him would be good as he would be useful in clans that does not have an unflipper yet.