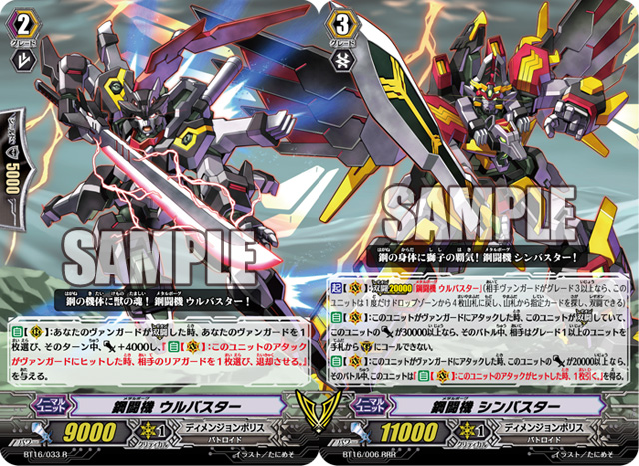 Hello everyone! I have finally decided to write on the removal of clan restrictions for the cards in the new season! Personally I welcome this change with open arms as I have always liked the idea of mixing clans. This could allow for some very interesting decks and some decks could use cards to help them do much better than usual.

Besides the worry of grade 1 due to forerunners, almost anything and everything can mix as the restriction for quintet wall was removed. Clan restriction for perfect guards seems to be removed as well, though it seems that only applies for Royal Paladins right now. Even then, with the Legion era, I can see quintet walls being a preferred sentinel compared to perfect guards.

From what I observed, one of the most popular mixing is using other clan cards that work when your vanguard is in legion to gain extra attack strength or ability to retire. Some examples are Frozen Ogre and Metalborg, Ur Buster. These cards allows clans to do what they normally would not be able to and gives different flavours to decks depending on which cards they use. I can't wait to see what Kagero has to offer as it could possibly provide decks with good retire abilities. There is Brawler Youjin but I would like to retire the back row.

Though mixing clans is much more possible now, with the card pool we have right now, mixing might just be the addition of one or two cards from a different clan. One of the reason is forerunner. You would need to ride a grade 1 of the same clan to be able to use forerunner. You could possibly start out with one clan and end up with a grade 3 from a different clan but the grade 1 setup is highly clan restricted. Another reason is because of the existence of archetypes. Archetype cards play well with other cards in the same archetype. If you choose to mix, you would have to lose out on some benefits the archetype could deliver.

One worry I have for the opening for clan mixing is that by the end of the season, some cards would be highly preferred and used in every deck. With the ability to mix even grade 3 bosses, the most powerful cards would be used and of course, their legion mates, which possibly have just as good of an ability. Unlike the Link Joker season, where Lord exists to separate the clans, everyone would have the same mix of cards for the best deck. I really hope this will not be true.

Ultimately I really like what is going on in Vanguard right now. With the very amazing Raizer support and news of upcoming Oracle Legion, I have nothing but high hopes for the future of the game. I wish everyone have a fun time mixing cards of other clans to see how each card will interact with their deck and possibly make it a better deck!