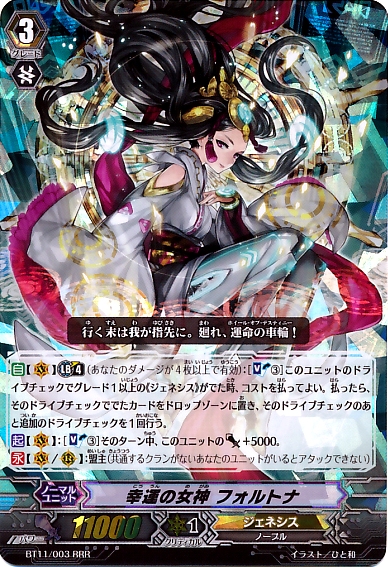 Back for another post! Today I will write my opinions on Fortuna! She is a Genesis ace card which has the ability to increase your chance of checking triggers!

When this card first came out I overestimated the card quite a lot because of her ability to allow you to do additional drive check when you don't get a trigger. The ability in itself is very powerful as it lets you decide what you want in your hand to prepare for the upcoming turns.

The ability is somewhat costly at soul blast 3. The number may seem small but it's not easy to build soul enough to check the number of cards you may want. The ability is also a double edged sword as you prepare for her limit break through soul charging units. Needing soul charge means that you run the risk to losing triggers and important cards into your soul which could bring you to a dangerous situation.

Although in saying that, Fortuna is a very powerful unit with the correct setup. Your opponent would need to be alert that they can be double triggered with ease if you have a stack of souls. This means that your opponent would have to use up more shields than usual during late games. This can be used to bluff your opponent into wasting their perfect guards and shields and not using the Limit Break just to use it the next turn.

This may be true but any smart player would know not to let this unit have limit break if they don't have a sentinel or the opponent not having the required soul. It also helps that the break ride units for Genesis doesn't hit for 13k so they would need a 9k booster to hit 21k. Fortuna players also need to beware to not deck out. Because you would want to have at least 12 soul, decking out is quite possible, especially with draw triggers.

Fortuna also has problems when she is rode as the first grade 3. This is because that you would not have the required souls to make an impact. If you want the break ride, you would need to reride twice and that could hurt you on your speed and field building. Being a deck that needs setup, it is also quite slow to be brought into action. With time limits on official tournaments, she might not be the best card to be using.

Fortuna is a very powerful card with beautiful art. Although there are quite a lot of set backs to using her. You would need to practice using her so you would know what to do. Watching out for your deck and remembering your triggers are also important for the build.