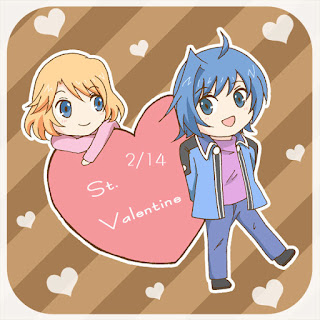 Hello everyone, I wish everyone a Happy Valentines Day! With set 10 just around the corner and, I believe all the cards revealed, I am writing this post to state my opinion on the set.

This set is an amazing set! This set has Royal Paladins after a long while not getting cards from sets, Spike Brothers getting amazing cards and also the beginning of a new clan, Genesis!

Let's start small, the Nova Grapplers! The two main focus for this clan in this set would be Ethics Buster and Riot Horn. Ehtics Buster is the Break Ride for the clan with the ability that allows you to stand your whole front row. This ability is amazing with lots of many other cards in the clan, especially Stern Blaukruger. Riot Horn is also a great addition to the clan as it stands when a Beast Deity on the same column stands. This works great with stand builds and ability that stands your cards which are present in most builds except Raizers.

Next we have the Spike Brothers! The main focus for this set would be the Bad End, Thermidor and Marilyn reprint! Bad End is an amazing card that gives Spike Brothers a huge boost in power! Bad End is also only a RR so he won't be too expensive. Thermidor gives the boosted unit extra power and returns it to the deck which is extremely helpful when you need the extra empty space! Spike Brothers is also getting a reprint for their perfect guard, Marilyn with a new beautiful alternate art! It's just too bad that they did not get a new set of triggers which would have really helped increase the trigger options.

Now to the clans which got more cards. First up is Genesis! Genesis is a new clan used my Misaki in the anime for the new season! The clan focuses on getting soul during the early game and using them later on the game for powerful abilities! Himiko and Artemis abilities are draw power but Iwanagahime is telling us that they are more than just that. I am really interested to see what abilities Bushiroad will give them in the next set!

After that, we have Royal Paladins with the focus being Jewel Knights! Ashley is their Break Ride which provides critical pressure and works great with a lot of Royal Paladin cards, especially Soul Saver Dragon. Salome is the main card for the archetype and with a decent amount of Jewel Knights in the deck, Salome is able to easily fill up your field with the desired units. Salome also has an amazing Limit Break that gives her +2k power and extra critical when you have the correct field. Royals also gets Flash Jewel Knight, Iseult which is a new perfect guard for the clan. I am looking forward to seeing more Jewel Knights in future sets!

The next paladin clan, Gold Paladins also got cards to further improve on Liberators in their trial deck! Although, most of their important cards are in the trial deck and so the cards in the set was not too interesting, most of them are copies of other Gold Paladins with Liberator names. They got a key grade 3, Alfred which has great consistency in getting a field of liberators for his Limit Break! Golds also got a Liberator Mark perfect guard.

Last but not least, Narukami! Narukami's Eradicators are actually pretty interesting compared to Liberators. They are not too much copies of their previous units which gave them more personality. They got two main vanguards in this set, Gauntlet Buster and Descendant. In my opinion, both are just as strong as the other. Both of them has the ability to gain extra criticals and goes very well with the Break Ride in the trial deck. Narukami also got a new perfect guard for Eradicators.

Other than clan focuses, there are also some pretty interesting copies of cards. The set has copies of Vasuki, which gains 10k on a rear-guard when you ride a grade 3. Dignified Gold Dragon copies for clans are also in the set. These cards are better than the usual 12k attackers because they have the Limit Break ability that allows them to gain 5k power on the vanguard circle. Other than that, there are a few new copies of cards that with Limit Break requirements, like Clowdine and Rushgal. Rushgal copies are pretty good for non-counterblast decks and makes for a good 9k booster. The most interesting copy of the set would be Pringal copies, which provides some draw power.

This set really is amazing for the clans in it. The support are great and even the copies are pretty decent. I hope we will be able to see something similar for the upcoming EB6 and set 11.